The macroscopic problem of microplastics

On their origin, innovative solutions, regulations and action.

A lot of products that we use in everyday life experience wear and tear. That is why we have to change our car tires once in a while or buy a new sweater when the old one has thinned out. But have you ever thought about where the material goes that is lost during the usage of those products? In the case of most conventional plastics (like the rubber of car tires and the polyester of your sweater), tiny fragments are released into the environment and accumulate there in the form of so called microplastic particles.

Microplastics which are per definition plastic particles between 1 µm and 5 mm have been found in all environmental compartments, from marine and freshwater bodies, to soil, drinking water, and air. Alarmingly enough, researchers could not only prove their existence in urbanised areas but also in the most remote regions of our planet, such as the arctic ice. 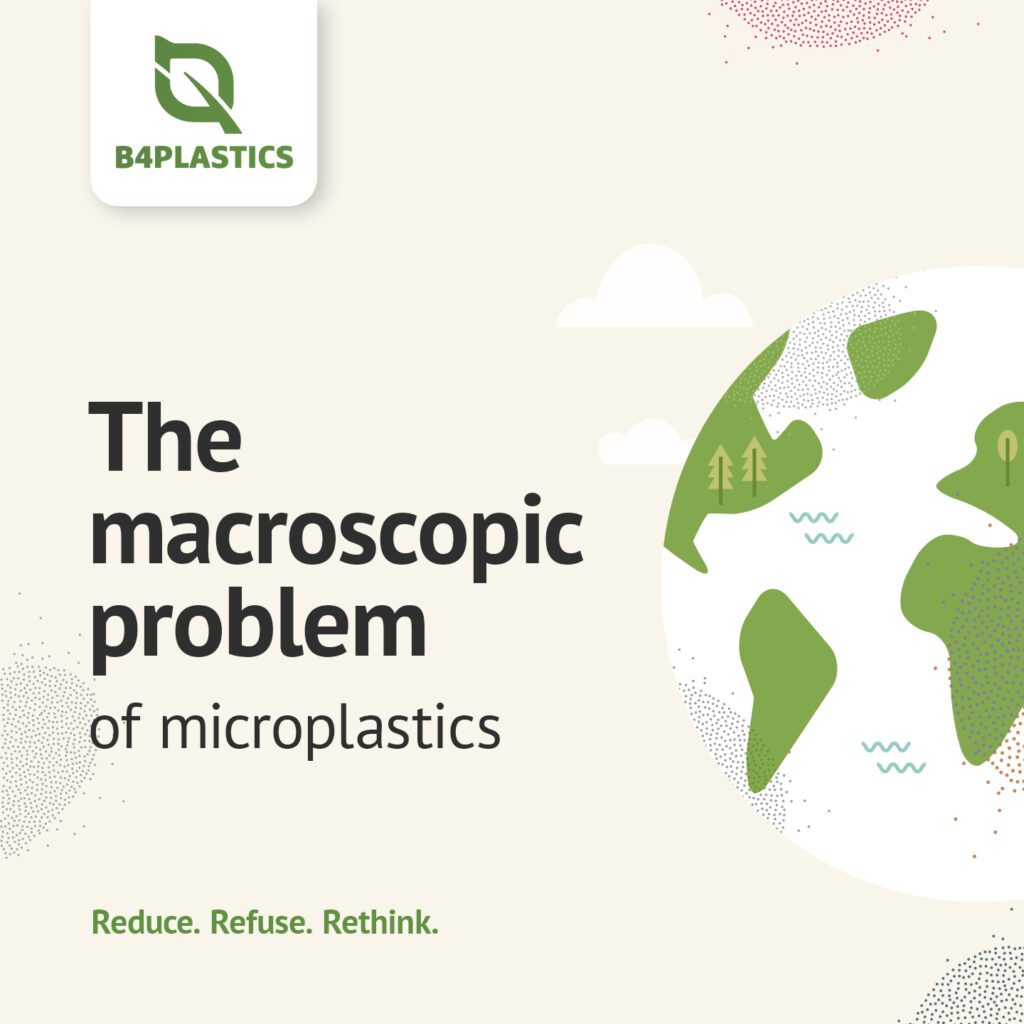 Microplastic particles are not only generated by the end products that are tangible, such as tires and cloths, but more so throughout the whole lifecycle of a plastic product, beginning with emissions from the granulate production to littering at its end-of-life. Especially plastic packaging waste mismanagement is recognized to be a source for microplastic pollution. Littered plastic waste starts to fragment in the environment, resulting in those tiny particles that will persist for hundreds of years within several ecosystems. As such, they are ingested by organisms and travel up the food chain until they finally end up on your plate. But that is not the only way microplastics enter our body.

Apparently, microplastic particles reach human bodies also through the air that we breath. Those are referred to as airborne microplastics. Recently, these have been found in human lung tissue. Researchers estimate that humans are inhaling airborne microplastics with a rate ranging from 6 to 272 particles per day. Additionally, scientists from the Vrije Universiteit Amsterdam have detected microplastic particles in the blood of 80 % of the people tested. Mechanisms of toxicity are still unknown but particle properties such as the density, type, and chemical components have been suggested as being cytotoxic, i.e. toxic to our cells.

Since most of the microplastic particles released to the environment are not biodegradable they accumulate rapidly, and the issue is becoming more and more pressing with every minute. At B4Plastics, it is our mission to avoid the formation of these microplastics, by designing our biomaterials in such way that they are completely degradable and non-toxic to the environment. For this, we do not only analyse our biomaterials through certified biodegradation and ecotoxicity tests, but we also study degradation pathways offering us a faster indication on their behaviour. Our tagline “Reduce. Refuse. Rethink” refers directly to the UN Sustainable Development Goals (SDGs) we focus on. With “Reduce” and “Refuse”, we call and strive for responsible consumption and production (12), together with climate action (13). While we aim for improved life below water (14) and on land (15) by actively rethinking the biopolymers and their impact on the environment globally.

Currently, though, there is no standardised method or framework in place to monitor and reduce the amount of microplastics that is caused by plastic products. Therefore, the European Commission initiated a public consultation on microplastic pollution. It is of utmost importance that we share how we think and feel about these microplastics. Only in this way, the European Commission can grasp how microplastics are perceived and too which extent they are regarded as threatening. That way, the EU can set the necessary regulations accordingly. We often point our finger to governments, being too slow in taking actions. But when that government asks our input, we should take our responsibility and offer at least 10 minutes of our time. The more people share their opinion, the bigger the impact we can have. Time is ticking, so, let’s join forces and change the world together.

Contribute to the survey NOW: https://ec.europa.eu/info/law/better-regulation/have-your-say/initiatives/12823-Microplastics-pollution-measures-to-reduce-its-impact-on-the-environment/public-consultation_en

Together, with the power of innovative solutions and clear rules, we can still fight the microplastic pollution!

Further information can be found in the mentioned studies:

Subscribe to our newsletter to always get the latest updates.

B4Plastics is a Polymer Architecture company, catalyzing the introduction of novel biomaterials, and growing them from niche to bulk applications. As an architect creates your dream house, we create your dream plastic.

B4Plastics is a Polymer Architecture company, catalyzing the introduction of novel biomaterials, and growing them from niche to bulk applications. As an architect creates your dream house, we create your dream plastic.